Hey babes!
So, a while back, I got to interview my personal favorite queen ever (and the only Tumblr in my favorites sidebar), Hipsville! In case you've been hiding under a rock for the past few years, Hipsville is the raddest, most unapologetic, body posi fat feminist babe on Tumblr! When she's not blogging about her adorable girlfriend, great music, and being queen of the internet, she also posts the CUTEST outfits on the web! I got to interview her and find out her inspo, how she got into body acceptance and ~MORE~. Read it below!

What’s your name? How old are you? TELL US A LITTLE BIT ABOUT YOURSELF!
My name is Luna, and yes that’s my real name! People often think it’s not my real name, but I was born on a Lunar Eclipse on April 3rd, 1996, and I’m turning 17 this year!

When and why did you start blogging?
I started blogging about three years ago technically, I just got into it more in the past two years. I originally started blogging because my ex-boyfriend told me I should get a blog, but I didn’t use it much. Then I started making a lot friends on here, some of which I’ve been following these entire three years, and I adore them
all. 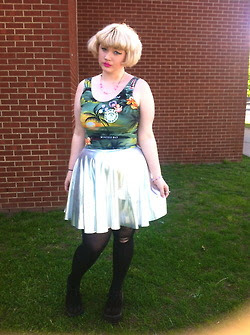 If you were a flavor of ice cream, what flavor would you be?
I’d probably be cookie dough or something like that. I don’t even know why. Cookie dough rules, and I rule, so I’ll just go with that as an answer.

How did you get into fashion and style?
I have always been somewhat into clothing since I started middle school. Although my style in middle school was atrocious, it was still “different”. It wasn’t until I got into high school that fashion became very important to me, especially during my sophomore year. It tied very strongly into body acceptance because dressing certain ways helped me express myself and also flaunt my body. 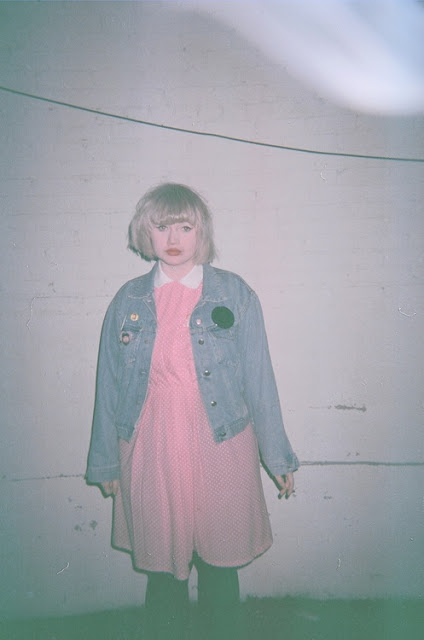 What are your favorite books, movies, and bands/artists?
I’m a huge Vonnegut fan, my favorite books of his are God Bless You Mr. Rosewater, Breakfast of Champions, Slaughterhouse Five, and Welcome to the Monkey House. Other books I like are One Flew Over the Cuckoo’s Nest, The Great Gatsby, The Long Hard Road Out of Hell (an excellent autobiography even if you aren’t a Marilyn Manson fan), The Hitchhiker’s Guide to the Galaxy, 1984, The Great Shark Hunt, Fear and Loathing in Las Vegas, and Into the Wild. I’m also a huge Allen Ginsberg fan.
Some of my favorite movies are Ghost World, The Big Lebowski, SLC! Punk, Heathers, Reservoir Dogs, Pulp Fiction, Fear and Loathing in Las Vegas, Fast Times at Ridgemont High, American Beauty, Spun, The Devil and Daniel Johnston, Trainspotting, Hard Candy, and Almost Famous.
Music is one of the most important things to me! My favorite musicians are Ty Segall, Reatards, Jay Reatard, Hunx and his Punx, King Tuff, Ramones, Fang, Flipper, Dead Moon, Johnny Thunders & the Heartbreakers, Sonic Youth, Nirvana, Bauhaus, The Moldy Peaches, Black Lips, Alien Sex Fiend, The Stooges, Butthole Surfers, and old Marilyn Manson. 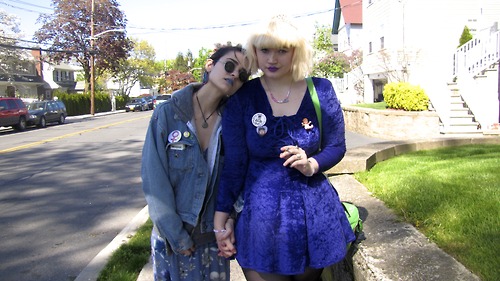 Your style is so rad and unique and AHHH, SO PERFECT. Where do you get your inspiration for your outfits?
I get my inspiration from lots of people! Obviously like a billion other people, Courtney Love is one of my style icons. So is Debbie Harry, Lydia Lunch, Jayne Mansfield, and Bridget Bardot. A huge part of my inspiration is from 1920’s-1960’s women.

How did you find out about feminism?
The first time I had ever heard of feminism was when my friend Juliet (neutralmilkhostel) lent me a book on feminism when I was in 7th grade. I found it interesting, but didn’t get super into it at that point. Tumblr was a hugely important influence on my learning in feminism, as well as reading books recommended to me on the subject. However, I’d say that this website definitely had the hugest impact on me, as it helped me become informed on not only feminism that applies to me as a cis white woman, but it helped me learned about intersectional feminism, as well as teaching me about racism and cissexism and other topics such as that. Of course, I still have a huge amount to learn, but I’m glad I’ve begun the process of educating myself on these topics. 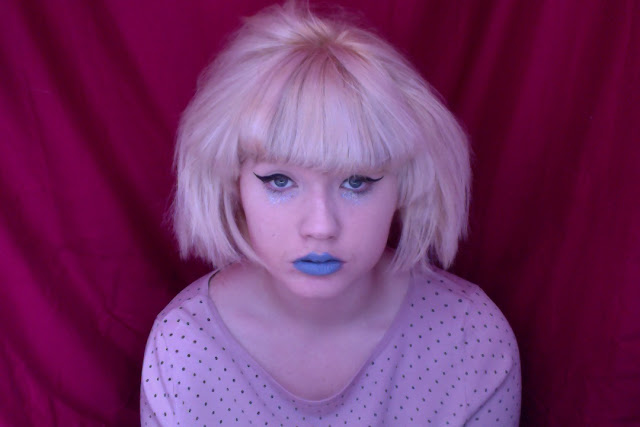 How did you find out about body positivity/fat acceptance?
The first two blogs I ever found relating to body positivity and fat acceptance were Stop Hating Your Body and Chubby Bunnies. When I was a freshman I submitted a photo of my stomach and thighs to Stop Hating Your Body, and was shocked at all the nice comments. At this point in my life, I was still feeling as if I needed to lose weight to feel good and I was still very self conscious. As I started to become more accepting of my body (still not quite), I submitted a photo to Chubby Bunnies, which I did several more times. Two of the people on here that helped me a lot with my body without even knowing were Jen (pussybow) and Sarah (lotsalipstick). It’s kind of funny because for a long time I used to look up to them a huge amount and was so jealous of their beauty and confidence, but now I share the beauty and confidence that they have. It’s also weird to think that they were almost like “celebrity” type people to me, where I’d send them long messages telling them how great I thought they were and such, and now they both follow me and talk to me and I’ve met Jen before at a King Tuff Show.

Why are the feminist and body acceptance/fat acceptance movements important to you?
Both of these movements are SUPER important to me and directly apply to me. Feminism has helped me realize a lot of things about how the world works and why I and other women are treated a certain way, as well as opened my eyes to other inequalities that women of color and trans* women face. I think feminism has ultimately helped me to better myself, and I still have a lot of work to do, but it’s had a hugely positive influence on my life.
The body acceptance and fat acceptance movement had one of the biggest impacts on me ever. I would honestly be a completely different person if I had never accepted my body as it is. Confidence is one of the larger parts of my personality, and once I learned to accept my fat body and things of that nature, I was able to truly become more how I am today. These movements helped bring attention to the inequalities many fat people are faced with (I had never even realized that fat people are literally KILLED by doctors refusing to treat them for their weight), as well as to help me look at all body types with the same set of eyes. 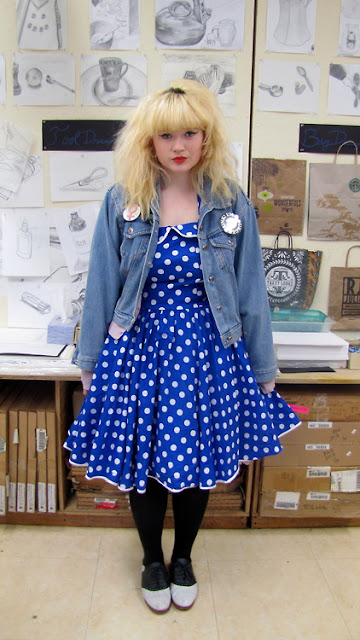 Your art is so so so so cool and amazing and just different. It’s so original and feels really personal. Where do you get your artistic inspiration?
Ahhhh thank you so much!! I always feel surprised when people compliment my art for some reason. One of my favorite artists is Bridget (vile-insect) and another artist who I adore is Josie (bemyghoulfriend). Lately I’ve been inspired by a strange mix of either very bright, blocky, vibrant colors, or just black and white art. I also very much like to use a lot of geometric shapes in my art. For a long time I tried to improve on realism, but I think my art took off much more when I gave up the notion that realism is the best kind of art and looked at all sorts of different kinds of art. Also, taking an Art History course has inspired me as well! 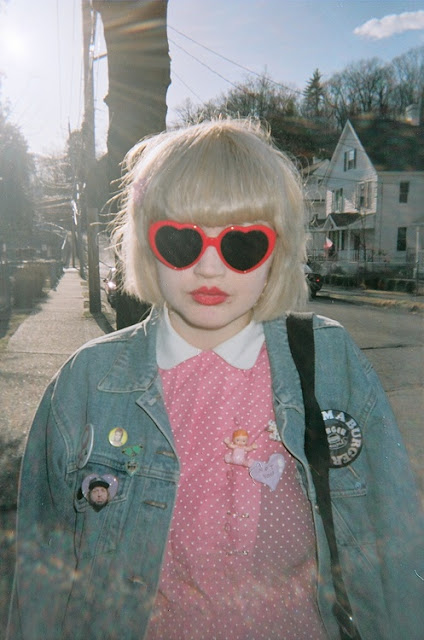 Name your top 3 style icons.
Courtney Love, Jayne Mansfield, and I’d have to say Victoria B (toridori69) is one of my favorite people when I wanna look at nice clothes.

Anything else you’d like to leave us with?
Thank you so much for interviewing me! It always makes me feel nice that anyone is interested in what I have to say, I feel like I left a lot of things out of my answers, hopefully that’s not the case, thank you so much! <3 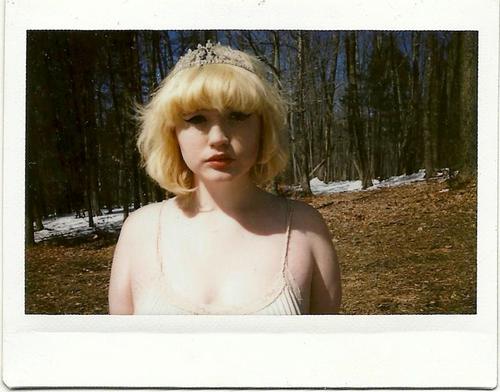 ISN'T SHE THE MOST FAB INTERNET PRINCESS? Be sure to check out her writing at the Pulp Zine, her perfect blog, sob over her perfection, and look for more blogger interviews in the future!

Drop me a line at PsychedelicDaisyBlog@gmail.com 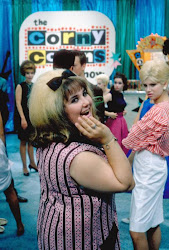 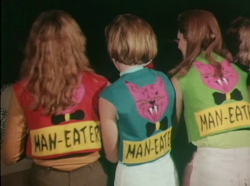 All photos are taken by me or my family, and all art is made made by me unless otherwise noted. If I've used a picture of yours that you'd like me to take down, just shoot me an e-mail!
Side images are from Tumblr, except for the poem, which is mine. Header made by me.